If you think it is complicated, you are very wrong. Just follow this simple recipe, and you will make a way better cream of chicken soup compared to some canned types available on the market.

Tips on how to make cream of chicken soup recipe better

If you want to make the best cream of chicken soup, you need to gather fresh and organic ingredients. This will give your soup the flavor and taste you want. In addition, you should not rush the soup. Take your time when preparing it, and you will love the results.

About Cream of Mushroom Soup Recipe

Check More:   How to Use NuWave Air Fryer to Make Healthier, Delicious Meals

What healthy alternative replaces cream of mushroom soup in a recipe?

If you want the best healthy alternative to replace cream of mushroom soup in a recipe, you should go for a cream of chicken soup. This soup produces almost the same texture and taste. You can as well consider sour cream or cream of broccoli.

No votes so far! Be the first to rate this post. 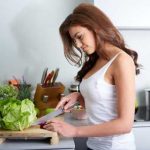 With me at WinRecipe.com, you can be sure of getting the right recipe that will give you true cover all through the day and the week as a whole. We are the winners when it comes to quality food with the right ingredients which will impact positively your body system.